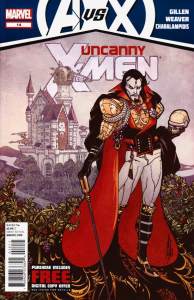 In the middle of AvX, Gillen decided he wanted to get back to his Sinister plot.

Inside front cover ad is for Amazing Spider-Man’s video game. 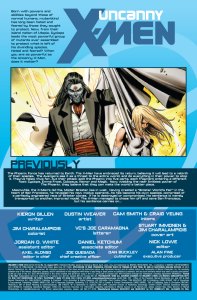 Previously.  The Phoenix Force is back, and it has empowered five X-Men – Cyclops, Emma, Magik, Namor and Colossus.  Meanwhile, and this will be the entire plot of the issue – we catch up with Sinister, as he is living in his own SinisterWorld, where everyone is Sinister.

Weaver does an amazing job of painting the issue, it is just unfortunate that it is a purely Sinister issue.  I had originally didn’t buy this issue as I never saw Magik in it.  That was prior to learning about Marvel Database, I saw this issue was listed, luckily – Hastings had a copy and I had enough time to read the issue and I finally saw the page, with Magik.  We’ll get to that below.

Since I didn’t read this issue, the following issues left me a tad cold.  I didn’t quite get the entire atmosphere.  It also didn’t help that I’ve never been much of a Sinister fan.

Sinister has always been huge on cloning and he finally realized a dream, to live in a world of himself.  If something were to happen to him, his mind would just move to another clone body – an upgraded clone body.

Sinister London.  Deep Beneath the Earth’s Surface.  The main character we follow, is actually a man who has turned into a Sinister clone.  He gets to interview Sinister-Prime.  Sinister likes milk, so he has cows all over the place.  He doesn’t care for women, so there are no women, he has nothing against women or for them – so why bother.

Gillen takes the opportunity to world build here.  There is a creation engine, that is constantly making Sinisters.  If the machine stops, half of the clones will become women.  As soon as the engine is fixed, those women will revert to males again.

A moloid breaks to the surface and Sinister shoots him dead – on the spot!  It is a nice reminder that they are under the surface.  Sinister London, is actually an old Moloid cavern.  After his last defeat, he went underground to hide.  Now, he is just waiting for the Phoenix Five to come gloating.  Also, the milk is not really milk but a nutrient-enriched brew.

There is an ad for Ghost Rider, Spirit of Vengeance on BluRay – which we own but have yet to watch.  One of these days.

The interviewer has murderous intentions but wants to give Sinister away from eyes and guards.

Sinister really adores 19th century London, but he chooses to live in a castle.  This society is art – and art requires appreciative criticism, history and hagiography.  Which does sound right.

In Sinsiter’s living quarters, the interviewer (who has a toothache of free will) wants to take a picture.  By doing so, he teleports the two of them away.

The art direction (and story) draws our attention to the fact that Sinister Prime has his forehead diamond being the color of red.  The rest of the clones, have a flesh colored diamond.

Prime is forced into a chair but the diamond fades away.  Prime comes down the stairs.  Rebels against the system, are still part of the system – so, naturally, Prime has anticipated rebels.

Prime sends the interviewer to the edge of town.  From there, he is given thirty minutes to run from . . . Sabretooth clones! Which makes sense, as Sinister has all of the Marauders’ DNA.

There is a two page house ad for Ultimate Comics storyline, Divide We Fall.  Which was more of a common theme, than a proper crossover.  I only own the X-Men tie-in, wherein Ultimate Shadowcat grows Utopia.  Ultimate Cap will become the President, and I’m not sure what happens to Miles Morales Spider-Man.  Ultimate Comics X-Men is their first issue, of three – perhaps?

We see several trophy cases.  Sinister has been making a slew of clones – Gambits, Cyclops, Sabretooths and Phalanx.  Though I don’t quite get how the Phalanx clones work.  We see that the Gambit clones have accents.  Turns out, the accents are not genetic but trained as it is folksy and charming – which is pretty funny.  The Gambit clones are brain damaged as Gambit has always leaned that direction – oh Sinister, you clever minx!  Sinister hints that he has a twist that Cyclops will not appreciate.

This issue is getting better, it helps that clearly the interviewer was going to die – it was just a matter of time of waiting for it.

See the Phoenix Five at the bottom of the page?  I couldn’t see Magik but she’s on the other side of Cyclops.  That Cyclops, I feel like he is always portrayed standing inbetween Magik and Emma – he likes his blondes on either side of him.

Sinister Prime has stolen power from the Dreaming Celestial, now he plans on stealing from the Phoenix Five.

Sinister knew that the Avengers would step in, preventing the true host – Hope Summers – to not fulfill her destiny.  You don’t know this, but I’ve been staring at this laptop (that sucks!) trying to come up with the word “fulfill” I’m the worst.

Issue ends with the big reveal that Sinister does have women folk in Sinister London.  He has six Madelyne Pryors running about, in very nice dresses.

Seeing Madelyne (and a half dozen of them!) should rock Cyclops.

There is a house ad for X-Treme X-Men – the attempt to try an Exiles style book but with our Dazzler, in the lead role.  It started in July 2012, by the creative team of Greg Pak and Stephen Segovia.  I own issue 7.1, and that’s pretty much it.

Inside back cover ad is for the Civic HF.