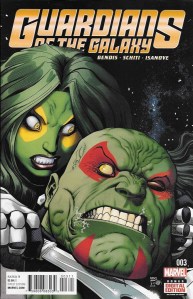 I had to add the Mahmud Asrar variant to my Wishlist.

I love how Bendis does these opening narrations –

Knowhere.  The Edge of the Universe.  Located inside the decapitated head of a Celestial.  The rent is insane.

The Marketplace.  We told you not to eat at the street vendor Glakin and you never listen.

Frunta’s House of Self-Defensery.  He has only a two-star rating in Drogon’s Market Guide.  He thinks it’s because his competition on the other side of the market is spamming him with negative reviews.  But it is really his sister.  She drinks.

Such a great way to introduce (he’s new to me, at least) Frunta, the weapon seller.  Yotat the Destroyer, and two friends, come into the store – they are looking for Drax.  Frunta only sells him weapons, so he doesn’t really know where Drax is.  There is an emergency news break, Spartax is under attack.  Frunta shouts that must be where Drax is, but Yotat isn’t happy about this development.  Yotat slices Frunta’s head, clear off.  In only three pages, we really got to know Frunta and now, I’m going to miss that guy.

Before these three space goons can go far, a messenger Brood tells Yotat that the Brood Queen wants to speak with him.

In Spartax’s Orbit.  Quill is losing his mind, he wants someone to rescue him, so that he can fight for his planet.

Spartax.  Royal Court.  Hala is making very short work of the Royal Court.  After she’s done with them, she starts tearing into buildings. 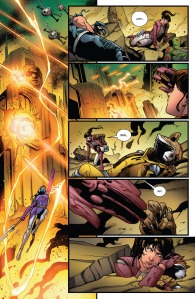 Kitty, being the great resource that she is, is quietly phasing her teammates underground. 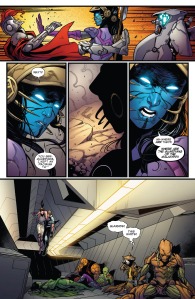 Hala, is ready for round two – but the Guardians are nowhere to be seen.

Kitty saved Venom for last, as Rocket starts to wake up. 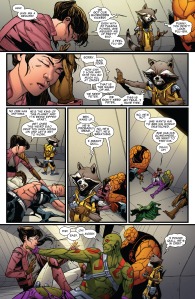 Kitty needs a minute, she is still hurting from Hala’s staff weapon thing.

I could really go for a Kitty & Rocket buddy title, the two of them have some great chemistry.  They have a very fun exchange of “flu-ish” and “foolish.”  She loves and hates him, so much.  He starts to get annoyed that she is always wanting to include Quill – he left the team and Rocket is fine with that.  Rocket thinks that Quill must be dead, as Hala really hates him.

Kitty goes over to check on Grimm.  She checks on Drax, who grabs her by the throat.  Kitty must be hurting, as she doesn’t phase through his grasp. 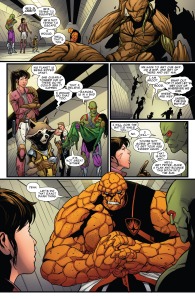 Pryde suggests that they need to get a ship and rescue Quill.  Pryde tells Drax that he is not rejoining the fight, they are regrouping.  Pryde’s plan is to get Quill, create a plan and bounce Hala into the sun.  Grimm has woken up, and wants to help accomplish her goals.

The Guardians get to the ship dock (is that the term?) and Hala has destroyed all the ships.  Which is pretty smart.  Space ship dock?  Space dock?  Pryde asks if Rocket can repair one of them, of course he can!

Rocket finally calls Pryde on all of her plans.  She recognizes him as the leader, which pleases him.

Rocket tells Groot that he is with him. 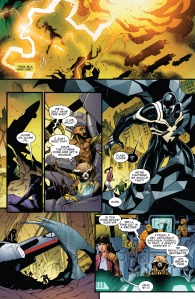 With one page turn, Rocket and Groot have fixed a spaceship.  Groot waves the team over.  Pryde tells Venom to cover them.  Drax isn’t happy that they are not fighting back.

Grimm and Rocket have a fun exchange. 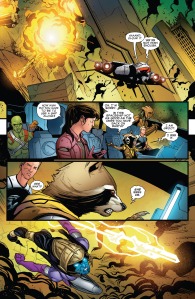 Pryde wants Rocket to put the ship into cloak mode, they are not high enough yet.  I didn’t even know that was a necessary element for cloaking.  They didn’t deal with that on Star Trek the Next Generation.

Rocket doesn’t have time to answer all of her space ship questions.

Hala has spotted the Guardians, which must be super easy, as there shouldn’t be any spaceships in the air. 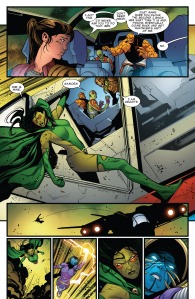 Grimm wants a second shot at Hala, but Pryde can’t ask that of him.  Before he can jump out of the ship, Gamora takes the lead. 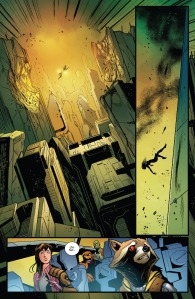 With a giant punch, Gamora falls to the ground.

Hala stands over Gamora, triumphant.  Hala keeps following the ship, gets up to Quill’s pod ship and breaks that in half.  We see that the Guardians’ ship is still flying on, so they must have picked him up.

Next issue’s cover shows the Guardians defeated but Rocket as the last raccoon standing.