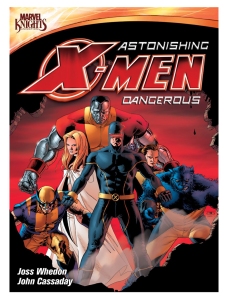 While rewatching this DVD, I noticed something.  It does a great job of crediting Joss Whedon and John Cassaday, as it should – it doesn’t mention Laura Martin, at all.

That got me thinking about how Chris Eliopoulos gets completely screwed with these DVDs.  Since the dialogue and sound effects are now spoken or heard, does he not get anything from the success of the comic, that made these motion comic DVDs possible?  Does anyone know?  It isn’t right that these two don’t get any credit, but to shut out Eliopoulos completely?  That is not cool.

I commented on how I thought Kitty did the least amount in this arc, out of the four.  I was pleasantly surprised that Kitty probably does just about the same amount here as the other arcs.

Kitty and Lockheed get spotlighted when all the psychics are taken, but these two can still communicate via their empathic ability.

Kitty saves the team on Genosha from the initial blast from the giant Sentinel that originally killed everyone on the island.

Kitty gets to experience her first fastball special.  Also, a major wedgie.

Plus, other situations.  I really like the motion comic but the credit business bothered me.