This is the 2nd Printing Variant, with wrap around cover art by Greg Land

Inside front cover ad is for X-Men Genesis, as Schism just ended.  This is the last issue of Uncanny X-Men, Volume One.  Regenesis will kick off with Gillen (still on Uncanny) but with a brand new team and Jason Aaron’s Wolverine and the X-Men.

I really like the care that someone had, that Uncanny was the longest running title Marvel had, without a relaunch.  It is nice that they threw on the very first page of the very first issue of (Uncanny) X-Men.  Some words have been changed, to reflect where everyone is.  Cyclops is in charge, Iceman is heading away with Wolverine, (Arch)Angel is fighting X-Force, Beast is also with Wolverine and Jean is dead – of course.  Xavier will be joining her, not too long from now. 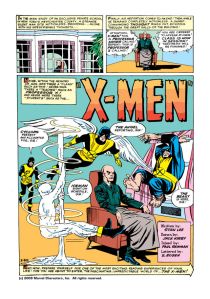 For comparison sake (and really, when will I ever get to have a good reason to include it?) here is the actual first page of X-Men 1.  I do like how this issue, 544, has the title of “Uncanny.”

We follow two people, this issue, Cyclops and Mister Sinister.  Gillen is all about Sinister, and he will be the main villain of Volume Two.

Somewhere.  Sinister is reading from his journal, titled, Uncanny X-Men.  Apparently he has been chorncling the X-Men’s adventures.  I wonder how he handles retcons?

Sinister recaps Schism, and the new direction the titles are going in.  Wolverine didn’t like that Oya was forced to murder to defend Utopia, and is starting a school, whereas Cyclops is leading the first wave of soldiers.

There is an ad for Once Upon A Time, which had a pretty stellar first season.  Then they butchered Peter Pan and I’ve been out of love with it, since.

Sinister steps into a machine.

Danger Room, Utopia.  Iceman is enjoying a final session.  I wish he had decided to keep the old school boots, over his ice form.

There is an ad for Spider-Man : Edge of Time.  Sometimes I wished I had played it, but I read that the free fall levels of 2099 were back, and in a big way, so that kills my buzz.  Not sure why they didn’t go with the more popular, Noir levels.  I don’t recall ever reading anyone who loved the 2099 levels.  On the same ad, is a tiny picture for X-Men : Destiny, which I also wished I played, I bet it must be a super cheap game now.

Scott enters the room and chats with one of his oldest friends.  Bobby makes the comment that the Danger Room is a lot more dangerous, these days.  Which causes Scott to say that most things are.

Now we get an ad for X-Men Destiny with Spider-Man Edge of Time, as a tiny picture.

Bobby tells Scott that Westchester (they must not have named the school, yet) won’t have a Danger Room, for a while, so he wanted one more work out.  Bobby makes a reference to how the Original Five, were the Beatles.  Scott tells him that there were only four Beatles.  Bobby says, not at first.

The two pass by Domino and Psylocke.  Later, they walk by Hope and Primal, Bobby says, “do you remember the time” and we get this amazing two page splash!

So great!  Not a bad way to try to cover 48 years of continuity!  Major crazy points to Land for getting Kitty Pryde and Lockheed, into the piece!  From her left, we have Havok, X-Jet blowing up, Mutant Massacre Sabretooth, Iceman from a few pages ago, Classic Mister Sinister, Archangel, Apocalypse, Emma as Old School White Queen, Rachel from Days of Future Past, Dark Phoenix Jean Grey, a Sentinel, Scott and Jean kissing – with Corsair watching like a creep!, Nimrod, Sauron, The Brood!, Wolverine v Hellfire Goons, baseball game with Kurt, Wolverine and Colosus, 80s Storm, Magneto and his original Brotherhood – Wanda, Quicksilver and Toad.  No Mastermind, though.  A tiny Xavier, over Magneto’s head, might be a reference to Onslaught?

Scott tells Bobby that he doesn’t have time for nostalgia – I guess I did.  I also take it, that means, those were Bobby’s quick memories and he was only really there for the Brotherhood moments.  Is there a famous time the Blackbird blew up?  Bobby tells Scott that he is less fun than he use to be, and he wasn’t that much fun, back then.

Elsewhere.  Sinister comes out of the machine, like goo, and is in his long hair even more British form, that will follow us for a few years.

Sinister goes back to narrating the book, we get the impression now, that he is writing from what he predicts must be happnening.  Which makes him, appear to be pretty slick – but doesn’t that imply that the X-Men (and meta-cally, ?, that the writers) are getting dull and predictable.  Like, of course, now this stuff will start happening, from this point.  Sinister suspects that Wolverine will give the school a name that will be extremely passive-aggressive (Jean Grey School, it totally is).  I like how Sinister narrates that, Logan shows claws that people don’t think he has. 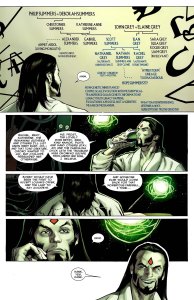 Sinister looks at his uber-creepy family tree of the Summers-Grey.  I adore how harsh the Grey family gets labeled – Irrelevant.  I’m not sure if that is his way of saying that they are all dead, so they don’t matter, or that – after Jean – they don’t really matter.  Scott’s side of the family, is clearly more important.

Sinister states that Rachel, Remy Katherine (!) and the remaining Guthries – will be joining Wolverine.  I do like how Sinister calls Shadowcat, Katherine, that’s pretty nice.  Cannonball really doesn’t get much of a spotlight, over on the West Coast.  He just couldn’t be on New Mutants, after Wells left the title and Magik accomplished her big goal.

Sinister suspects Bobby will be the last X-Man to leave (of those that are leaving) and the first to agree to leave, Sinister suspects that one more person will be making a farewell.  He assumes it will be Hank, as he is petty.

Beast tries to ruin Scott’s day, who is also not going to deal this nonsense.  I do think people forget, that Beast was being tortured by Norman Osborn’s goons – so he does hold a grudge.  But him holding onto that, for years to come, isn’t great.  Before the Blackbird departs, Bobby throws a final snowball at Scott.

Scott starts to take the pictures off the wall.  I guess war rooms don’t need, such things.

Sinister is in his very British Gentleman clothes, a much better outfit than his old stringy cape look.

Emma makes sure that Scott knows that she is there for him.  I really do miss these two together.  He doesn’t understand why anyone would want to go back to a school. 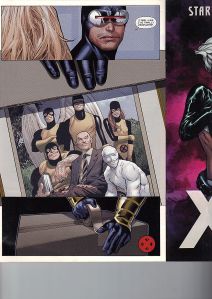 Scott has graudated, and it was that moment – that I knew that Gillen had a great handle on Cyclops.  There may have been more, before this, but Gillen may be my favorite Cyclops writer, up there with Fraction.

My only gripe, is, who tapes a box close, from a quarter down of the box?  One tapes the edges of the flaps down, then one straight down the middle, with maybe the flaps taped down, one more time.  Or down the middle, then the flaps and another one down the middle.  He isn’t taping anyone down, the way he is doing it.  Oh Scott, just buy more tape!  If he is worried about using as little as possible.

There is an ad for Astonishing X-Men 44, with Cyclops and Storm kissing.  This is our Scott and an alternate Storm, if I remember that correctly.  Creative team is Greg Pak and Mike McKone.

Next is the Regenesis one page ad.  Next week, Join Wolverine in Westchester for Wolverine and the X-Men 1.  I wish Kitty had wore that outfit, that you see in these ads.  I don’t think she ever does.  Next month, join Cyclops in Utopia for Uncanny X-Men 1. 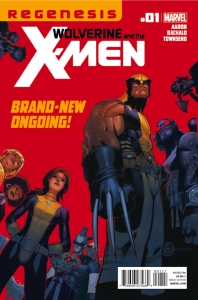 Inside back cover ad is for Jason Aaron and Marc Silvestri on Incredible Hulk 1.