Return of the Legion, Part Four of Five

Skipping the next two chapters, from the recap page – the only thing that seems like we missed, is that Magik has entered David Haller’s mind as he goes after Dani.

Cannonball tells the still present members of the team – Magma, Dani and Sunspot – what is up.  Cyclops and a team of X-Men are on their way, and David is heading towards them, as well.  He wants the team to use codenames, now that the battle is in full swing.  He wants Sunspot to be on the lookout.  He wants Magma in her fiery mode, as David shouldn’t be actively seeking out a fight with someone who’s skin is as hot as lava.  He tells Dani to get out of there, as she is the main target.  He tells her, and a car just shows up, which is weird.  It must be remote controlled.  Dani puts up a fight, since she doesn’t have any powers, Sam is trying to protect her – which annoys her.

What is going with David is this, since David isn’t steering his own body – his multiple personalities are taking the reins.  They are doing with, by holding onto a teddy bear, that belongs to Marci.  There are personalities inside of his head, but there are three people who are also in there – Marci, Dani and Magik.

Each personality has a specific power.  The guy holding the teddy bear, now, has X-Ray vision and can see the New Mutants.

Magik wants to know where Karma is, but no one is telling her.  Illyana does what she do and starts slashing (killing) personalities.  Which is pretty intense, but it has to be helping David, in the long run – right?

He is wrong about that!  After doing that, the personalities part so that she can find Shan.

Outside, David starts making his way towards the team.  The X-Ray vision jerk looked at Magma, naked.  That isn’t right!  The next personality has super speed and speed punches Sunspot.  He follows that up by grabbing some shrapnel and slices Sunspot’s stomach.  Who knows how rusty that piece of metal is!?!

The ground starts to melt around David.

There is an ad for the Nissan Shift.

Illyana gets to a dome with three doors.  She breaks the lock and finally is reunited with both Marci and Shan.

I like how compassionate Illyana is, when she finally lays eyes on her friend.  Poor Shan, has clearly been beaten up.  Marci points Illyana in the direction that, Davey, is in.

Outside.  Magma starts choking David’s throat but a new personality kicks in that is heat resistant.  he goes as far as to make Amara feel cold – super cold.

Cannonball arrives and fly punches David through a wall.

There is a double page ad for Ultimate Alliance 2, which was pretty disappointing but I wish we had gotten an X-Men Legend 3 – instead of them expanding to the Marvel Universe – but the first game was pretty fun.  My favorite will always be X-Men Legends 2.

Illyana slices another lock and finds David’s true personality.  I take it, that this is Shan’s first time seeing David, proper.  David knows that the shit has been flying.

David, was seeking help, that is why he wanted Dani.  Marci tries to comfort her friend, Davey, she also tells him that her doll has been taken.  Shan explains the importance of the doll, to Illyana.  Marci reveals the name of the doll is – Morrie.  David corrects her, it is Moira – which is nice, his teacher and friend.  They all exit the dome and Illyana demands the doll.

Outside, another personality takes over.  He puts his fingers into Sam’s face, which can’t feel good.

A wolf personality takes over, after a healer heals them – costing 4 MP.  The wolf is about to bite Sam’s throat, when Dani drives right into the wolf and into a wall.  The wolf gets up and attempts to attack Dani but she stabs a knife into the wolf’s leg.  One does not mess with Dani!  This, unfortunately, does not slow him down and he goes after her. 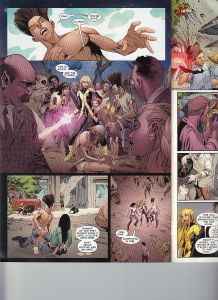 Before any additional damage can be done, Illyana has found the doll and is the main personality in charge.  I like how whoever holds the doll, their voice kicks in – it doesn’t quite work in comics – so people have to announce who they hear.  Dani recognizes Illyana’s voice and knows that everything is okay now.

Later.  Emma Frost, and some others, I imagine – arrive on the scene.  We get the impression that Emma has started the mind wiping of the town.  Sunspot is getting medical treatment and Magma has a blanket over her.  Madison Jeffries places a helmet over David’s head, to calm him down.

Dani’s right leg is in a brace as is Sam’s left arm.

Issue ends with Sam confiding with Scott.  Most of his team hates him, and the others are hurt.  Sam goes as far as to claim that a few of them believe they can do a better job at leading than he can.  Scott, ending the issue on a light note, states that Sam is now experiencing what he has to deal with, all of the time.

Next issue promises to have Warlock’s return but I’m planning on skipping that issue and reviewing issue six – relatively soon, as that’s the issue I got for Father’s Day 2015.

Inside back cover is an ad for the incredible – Batman Arkham Asylum game.  Go out and play it, RIGHT NOW!

I would buy these Variant Cover collections, nearly every time.  If you have a theme event, and it has at least 30 covers, might as well collect them.  I own this one and the Wolverine Art Appreciation collection.

To Celebrate Timely Comics 70th Anniversary, Marvel released Frame Art variants like they did for Marvel’s 25th anniversary and the Women of Marvel Variants.  I do wish that they were done as regular covers for the October 2009 issues.

There were 39 of these covers.  All but two are shown on the cover (both front and back).  I wish the frame art would have made part of the cover to this comic.

So the two characters that are not shown on the cover are Magik and X23.  Which is so odd to me as the cover sports three Wolverines and two Spider-Mans.

I just want to own two of these – 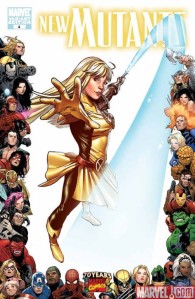 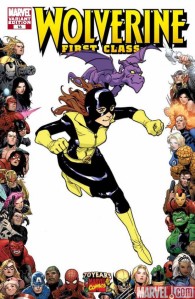 Wolverine First Class 18 with Kitty and Lockheed  by Takeshi Miyazawa

The cool thing about the covers shown in this collection, is that it doesn’t have the issue numbers or the ISBN cluttering the art.  Another nice thing about the collection is that the covers are in alphabetical order of the comic title.  Not sure what the other way of doing it is but I like that they went with the order they did.

This site has all of the covers –

The other issues were –

The Frame itself was designed by Jim Cheung

Only Storm and Invisible Woman are the only ones who are on all three Frames – 25th, Women and 70th, which is pretty impressive.

Comics Should Be Good are running the votes for Top Female Comic Creators, and I just can’t up with ten writers and artists, I mostly know female colorists.  So I thought I would at least promote the creative women that I’ve grown fond of over the years.

Writers – Devin Grayson and Gail Simone, both are mostly DC writers but both have written for the X-Men or X-Related projects.  Kathryn Immonen is another great female writer as in Marjorie Liu.  Of course, Ann Nocenti needs to be named, fantastic editor but famous for her Daredevil run.  Also, legendary Louise Simonson.  Kim Yale is a good writer, as well.

For anyone who wants to vote, voting ends on March 16, here is a handy link

Kelly Thompson, of She Has No Head! fame, has compiled a list of over a thousand women, so that list is here –

I really need to learn more female creators.  I was hoping compiling this list would have given me ten names on both sides.  I know we can group Pencilers and Inkers together but that still doesn’t get me to ten.

I went through the 49 pages of Tags that I have on this blog and came up with the above names.

I need three more writers before I can make my list official.  That’s a lot more ladies than I thought I have read or seen their work.  I really only thought I knew a small handful but look at the artists, alone, is impressive.

I’m being a little cute with those last three.  Wilson is writing X-MEN, that I haven’t read and DeConnick is writing Ms. Marvel, that I’ve heard good things.  I figured Thompson must be getting a few votes, so I threw her name up there, as I do like some of her columns.  I also got those two names from just reading the comments section of the Voting thread, I figured someone had to write some names down that I would recognized, that’s all I was asking for.

I will put the results when the final list comes out.  Besides the top two artist, I am okay with anyone making the list.

I’m very excited about Simonson and Nocenti’s placement.  Actually, I want Liu to place highly on the list too, Immonen, I’ve only read the one thing of hers (AvX vs 6) and I’ve own a few issues of X-Men Evolution, written by Grayson, so I do want all five to be on the list.  I can only imagine that the Top Ten of both, will be dominated by American comic creators.  That just makes sense with who is voting on the list.

I felt bad for not including Marguerite Bennett so Kelly Thompson was nice enough to let me edit my list.  Good bye, DeConnick and hello Marguerite Bennett!  I thought it would be in poor taste to knock Kelly off of her own list, or keep her in the tenth slot, so I bumped her up one.  That’s the least I could do.