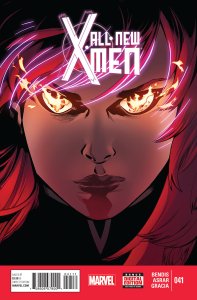 41 issues, all written by Brian Michael Bendis!  It should be stated that Cory Petit lettered every issue as well, which is pretty impressive to keep the same letterer for an entire series.

Since this was the main flagship title, sharing the honor with Uncanny – a lot took place in this series.  This is the series where the time misplaced Original Five X-Men starred.  Crossover overs storylines were – Battle of the Atom / Trial of Jean Grey / Black Vortex.  Other storylines include the much demanded sequel to Battle of the Atom, the Ultimate Adventure and the Utopians arc.

21 – Brandon Peterson and legend Brent Anderson (did a few pages on his own) Silva colored Petersn’s pages and Campbell did the Anderson pages, VC’s Cory Petit did all of his own lettering

25 – The All Star Jam Issue! Artists David Marquez with Justin Ponsor on colors for the Framing Device, VC’s Cory Petit on lettering duties – the other artistic talents of :

37 – Mike Del Mundo on pencils, inks and colors, though Marco D’Alfonso helped with the coloring and VC’s Cory Petit on lettering

There was a whole host of variant covers with this series so I’m not listing cover artists – not that I do but in case you were wondering. 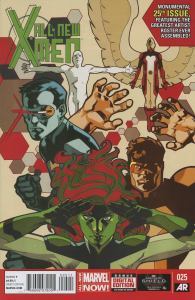 The issue is billed as the ‘Greatest Artist Roster Ever Assembled” and here is why :

Artists David Marquez with Justin Ponsor on colors for the Framing Device – the others are :

Along with the incredible artistic talents of :

That is an impressive lineup!

Thanks to The Complicated’s Review thread over at the X-Boards of Comic Book Resources.  He took the nice to match up the artists with the pages (as the comic doesn’t do it for us).

Here is what he wrote :

Bruce Timm draws a recap of Jean Grey’s history and then her (possible) future: Sitting on a throne of almost-naked people in her Xorna get-up (sans mask and pants).

David Mack shows us Cyclops getting burnt on an x-shaped cross because he has no team to back him in his fight for equality.

Robbi Rodriguez and Justin Ponsor has Archangel/Death/Apocalypse killing everyone.

Lee Bermejo and Marte Gracia gives us Colossus channeling his inner Cable with a BIG-ASS GUN!

Arthur Adams and Justin Ponsor shows us Beast being a beast in the Savage Land.

JG Jones and the X-Men on parade!

Ronnie Del Carmen gives us Kitty and Illyana “Free to live. Free to love. Free to experience adventure and friendship. Free to just be all that one can be.” which apparently involves them teaming up and fighting dragons, demons and ninjas and I really want this as an ongoing pronto.

J. Scott Campell and Nei Ruffino have Storm, Psylocke and Nightcrawler in space with guns. Presumably having fun.

Maris Wicks presents us with the epic and hilarious romance of Kitty Pryde and Peter Rasputin.

Jason Shiga gives us old Scott and Logan living together as “BFFs Forever!”

Max Wittert has an alternate reality installment of his Jean Grey comic strips where she and Logan are finally together.

Jill Thompson with EMMA FROST: AGENT OF SHIELD alongside Pixie, a red-headed woman and someone with green and white hair!

So thanks for that as I wouldn’t have been able to figure it out on my own!

The framing device is Present Day Beast is in bed, not able to sleep and the Watcher shows up.  So this is clearly a tie in to Original Sin but it doesn’t state that anywhere either.

Uatu, the Watcher shows him first all of these bad realities that he is responsible for.  Then he shows him some nice ones, the hard truth is that the nice ones can never occur because of Beast.  Not sure if it is all his fault or if Uatu is going to go to the other Illuminati members and showing them the error of their ways.  From what I’ve read in New Avengers, the Illuminati are destroying alternate Earths.  To save the Proper Marvel Earth but still.  That’s a lot of lost lives.

JG Jones gives us the parade, both Kitty and Lockheed are there.  Lockheed needs to be painted more often. 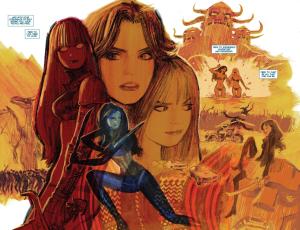 Ronnie Del Carmen, I really want a Kitty and Illyana ongoing!  Come on Marvel, give us our Demon Hunters ongoing already!  Thanks to DakenGirl for the better image! 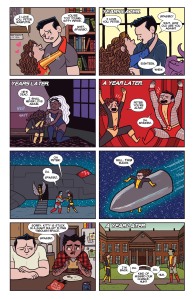 Maris Wicks does a great job of recapping the Kitty and Colossus relationship.  I even like the implied future too.  He even added a little Lockheed that I just noticed!

Jake Parker and Matthew Wilson, I am all for Magik being the Sorcerer Supreme.  When Bendis had Strange step down, I thought he was going in this route.  Instead he went with the ‘shocking’ Brother VooDoo.  It didn’t last.

Dan Hipp gives us some never before seen children of X-Men and Avengers hookups.  I am curious about Captain America and Magik’s son.  What must that relationship be like?  I imagine she dominates him, in every way. 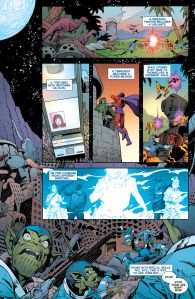 Can’t believe Marvel got Paul Smith and Bob Wiacek to do a page and it doesn’t even feature Kitty nor Lockheed.  Instead, we get – Cyclops, Mimic, Scarlet Witch, Doctor Doom, Magneto, Nightcrawler, Captain America and Beast.